Amid persistent industry lobbying for the lifting of property cooling measures, the government has reiterated its view that it remains premature to do so. The Real Estate Developers’ Association of Singapore (Redas) has warned of a potential downward price spiral given the supply deluge and rising vacancy rates. But there have been mixed signals from property launches last year, with some projects seeing strong interest while others were met with a cold reception. Here, BT looks at what’s hot and what’s not in 2015.

For the Frasers Centrepoint project, an estimated 30 per cent price premium associated with higher construction costs from the integrated project with access to a transport hub did not turn buyers off. Agents say it stood out as a community product with civic amenities like the library and the bus interchange. Prices of units sold last year averaged S$1,363 psf.psf.

Besides being part of a mixed-use development, The Poiz Residences by MCC Land also benefitted from its proximity to Potong Pasir MRT, as well as the new Bidadari housing estate. Prices were set at an average S$1,380 psf. To keep quantums affordable, some 65 per cent of the residential units are one and two-bedroom units ranging in area from 420 sq ft to 1,259 sq ft.

With a total of 1,327 units, Sol Acres by MCL Land was the largest EC project to go to the market and the best-performing EC project last year. It is also the first EC to have one bedroom units. But despite prices starting from a palatable quantum of S$356,000 for the one-bedders, there have been few takers for the 495 sq ft units, according to the developer. Agents note that small EC units are not attractive as ECs mainly attract HDB upgraders who are buying for owner-occupation due to the five-year requirement for minimum occupation. It would be highly unlikely for a young couple to buy a one-bedder unless they are bent on not having children in the first five years.

This city-fringe project by UOL Group has seen healthy sales arising from strong product attributes, efficient layout and design concept, according to agents. While the project’s price point is significantly above S$1,000 psf, the developer has concentrated on smaller units to ensure palatable quantums. More than 70 per cent of the 797 units in Botanique at Bartley are priced below S$1 million to ensure their affordability.

This project by CDL is the only new EC project located next to an upcoming MRT station (the new Canberra station on the North-South Line), which will be up and running by the time the project is completed. It also benefitted from being one of the first few EC projects to be launched last year.

The timing of launch for The Criterion was deemed unfavourable, being the last EC project to be launched last year just slightly after JBE Holdings launched an adjacent project, Signature At Yishun, at competitive pricing. One agent likened this to being “the last person to sit down at the dining table when all food is gone”. The sheer number of EC launches last year has also caused some dilution in take-up rates across ECs.

Despite keeping prices affordable at S$671,000 to S$1.1 million by not having private enclosed spaces (PES) and balconies to reduce total saleable area, EL Development sold only 62 of the 660 units in the first two months of the launch in February. EL Development managing director Lim Yew Soon conceded that the project faces “a lot of challenge” from North Park Residences. Given Symphony Suites' distance to the Yishun MRT station, it targets mainly families and does not offer one-bedroom units.

Sales at the 106-unit project at Farrer Drive in District 10 have not gained traction despite the developer applying a 15 per cent discount across its units, which translates to average prices of S$1,900 to S$2,000 per square foot (psf) after discount. Since May, it also offered indirect (non-price) discounts ranging from 2 to 5 per cent. The project has to be completely sold by 2017 to qualify for the remission of additional buyer’s stamp duty on land cost. 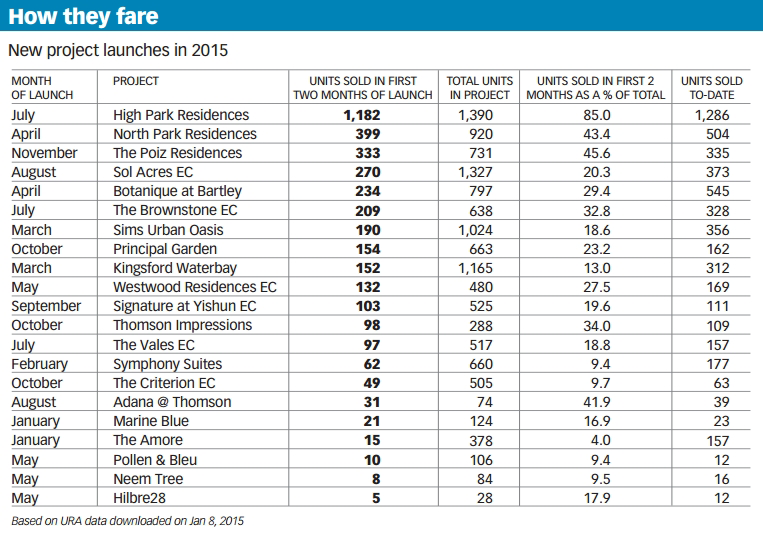